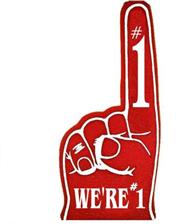 adjective – the state or position of being first, the best, or on-top (That’s from the Alicia’s Dictionary of Words and Phrases that Don’t Appear in the Dictionary, which is affectionately known as ADWPDAD.)

So I’m a huge fan of books. Duh, right?  But recently I began a book (Stardust by Carla Stewart) that reminded of one of my favorite things about a good book: a powerful and enticing first line.  Whenever I’m in a bookstore, the first thing I do is read the first line. If it’s intriguing, I snap up the book. But I’m not such a snob that I won’t continue reading to see if it gets any better. However, if it doesn’t have me by the first page or so, I’m done.

So today in honor of Wednesday Reads, I’m presenting the number-one books with perfect number-one lines. (Did you catch that double meaning;)?

“My marriage to O’Dell Peyton was already over when he washed up on the shores of Zion.” Stardust by Carla Stewart

“All happy families resemble one another, each unhappy family is unhappy in its own way.” Anna Karenina by Leo Tolstoy

“Sister Justicia Marie thought it was going to be a beautiful day in LA, full of mercy and grace, until she had to break a man’s finger at lunch.” Force of Habit by James Scott Bell

“One generally steps into a chapel to pray, not to kick someone’s butt.” Force of Habit 2: And Then There Were Nuns by James Scott Bell

“It was 7 minutes after midnight. The dog was lying on the grass in the middle of the lawn in front of Mrs Shears’ house. Its eyes were closed.” The Curious Incident of the Dog in the Nighttime by Mark Hadden

“Clare: It’s hard being left behind. I wait for Henry, not knowing where he is, wondering if he’s okay. It’s hard to be the one who stays.” The Time Traveler’s Wife by Audrey Niffenegger

“Ships at a distance have every man’s wish on board.” Their Eyes Were Watching God by Zora Neale Hurston

“There was a boy called Eustace Clarence Scrubb, and he almost deserved it.” Voyage of the Dawn Treader by C.S. Lewis

‘Where’s Papa going with that axe?’ said Fern to her mother as they were setting the table for breakfast.” Charlotte’s Web by E.B. White

“Daphne Sweeten’s knees buckled beneather her, but Sophie, her maid of honor, kept her from reaching the marble floor.” Scent of Rain by Kristen Billerbeck

“This is my favorite book in all the world, though I have never read it.” The Princess Bride by William Goldman

“All children, except one, grow up.” Peter Pan and Wendy by J.M. Barrie

“Not every 13-year-old girl is accused of murder, brought to trial, and found guilty.” The True Confessions of Charlotte Doyle by Avi

“It is a truth universally acknowledged, that a single man in possession of a good fortune, must be in want of a wife.” Pride and Prejudice by Jane Austen

“When I stepped out into the bright sunlight, I had two things on my mind, Paul Newman and a ride home.” The Outsiders by S.E. Hinton

This is by no means an all-encompassing list, but just some that I’ve experienced in my reading journey. And note this disclaimer: just because the first line is good, doesn’t mean the entire novel is equal to its perfection. However, it is an excellent indicator that it could be a great book. Happy reading!