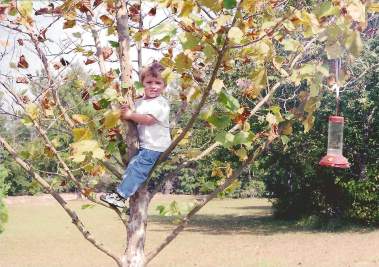 The day I took my almost 3-year-old son to the pastor for prayer was the low-point.  After  a complete meltdown in the Winn Dixie parking lot, my son sat whimpering and snubbing quietly in his room. I called my husband sobbing in complete mother-failure fashion, and he suggested we meet at the church to let the pastor pray for us and our son.

Now while this sounds like a dramatic introduction to a tragic family story, it’s really only a glimpse into life with a strong-willed child.  My hopes of mommy adoration and a perfectly well-behaved boy had been shattered in that parking lot. God had gifted me with an all-boy daredevil with a determined and stubborn heart. He climbed trees,

strolled precariously along the back of the couch, and stayed covered in dirt from his constant outdoor explorations. By the age of 2-and-a-half , I quit chasing him altogether. I decided that reality discipline (thanks Dr. Leman) was our best course of action.  If he fell while walking the front porch railing and broke his arm, he might think twice before doing it again. He was the wager of epic battles of will. I remember several times where he was put in his room until he could come out with an apology for his behavior or disobedience.  Eventually, he would emerge from his room with a sweet hug and an “I’m sorry, Mommy” but that was after HOURS of room isolation. 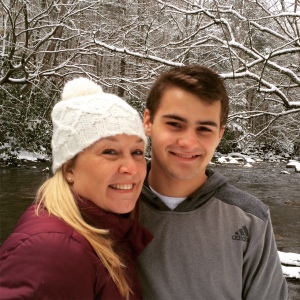 My fella and I today

That dare-devil with dogged determination turned 17 this past weekend (which is a feat considering I honestly thought he wouldn’t make it past 4). What an incredible young man he has become.  He still loves a challenge and rarely lets anything get the best of him. His mind brims with crazy knowledge about algebraic formulas, historical facts, pop culture tidbits, and random thoughts that leave the family in stitches. He’s a self-learner: if he wants to know something he studies it until he’s proficient. (He’s even taught himself Korean!) He’s a defender of the underdog and hates injustice in any form — including the oppressive educational system -he is 17 after all.  He loves with his whole heart. He’s all in, all the time, for the people and things he loves.

If only I could have focused on this traits when he was younger and not let them exasperate me.  All that he is now was there when he was that precocious 3-year-old. He wasn’t perfect then; he’s not perfect now, but he has taken those “perceived weaknesses” and made them his strengths.

The Message version of 1 Corinthians 13:12 says, “We don’t yet see things clearly. We’re squinting in a fog, peering through a mist. But it won’t be long before the weather clears and the sun shines bright! We’ll see it all then, see it all as clearly as God sees us, knowing him directly just as he knows us!”

Today many of us are looking at ourselves thru a fog, peering in a mist, and what we see isn’t pretty. This verse, however, says that God sees us clearly, as the perfectly mature Christ-follower we are meant to be. He doesn’t focus on our weaknesses or failures. He knows were are getting closer and closer to the person he planned for us to be. While we often look at how far we are away from the self-denying, Christ-following, and sacrificial person we should be, God see us whole and complete in Him.  He has no reason to worry; he has a reason to sing — we are his treasure. Just as an artist paints with the end product in his mind, God see us as his masterpiece.

Maybe it’s time we focused on that picture of ourselves. Somehow I believe it will get us further in our walk with Christ than our current “misty” perspective.  Once we change our mindset,  Ephesians 2:10 will ring truer: “For we are God’s masterpiece. He has created us anew in Christ Jesus, so we can do the good things he planned for us long ago.” Then when those Winn Dixie  meltdowns occur, we can rest assured in the Creator artist and his careful blending of our imperfections, weaknesses, strengths, and beauty brushed flawlessly in one of his finest works.

3 thoughts on “Overcoming the Misty Image”